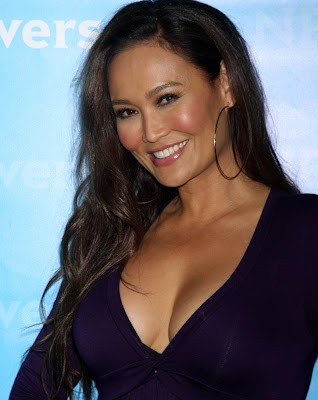 Tia Carrere the sex symbol and the star of the Waynes World and Relic Hunter -tv series showed some extremely sexy cleavage with a low cut neckline that let the middle sides of her beautiful boobies visible - this mature beuaty is such a hottie.  BTW, in addtion o her movie career Carrere has a singing career too. In 1993, her first solo album, Dream, was released, and went platinum in the Philippines. That same year, she was featured on the soundtrack of Batman: Mask of the Phantasm, performing the ending theme, "I Never Even Told You". Her second album, Hawaiiana, was released in June 2007 and takes Carrere back to her Hawaiian roots with four-time Grammy Award winning record producer Daniel Ho accompanying her on classic solo slack-key guitar and ukulele. The album was nominated for a 2008 Grammy Award under the category Best Hawaiian Music Album.
In 2009, she acted as co-host for the pre-Grammy Awards telecast online event alongside Wayne Brady.

But here's some more picture featuring this sex bomb and that awesome cleavage.